PeopleTools was designed to be database agnostic. In the past, the database support included databases such as Gupta SQLBase, Allbase, Informix and Sybase. The ability to support multiple platforms and add others relatively easily was a consequence of some excellent initial design decisions. Sadly, database platform support has dwindled to Oracle, SQL Server and DB2 in more recent releases of PeopleTools.

END_OF_DOCUMENT_TOKEN_TO_BE_REPLACED

I noticed that in PT 8.55 (well at least in .08 and later) that the PeopleTools meta-data for the Clustered Index on PSTREENODE lost the “clustered” attribute. I’m not sure why this was changed but you should be aware that this change could impact your execution plans – especially if you use row level security.

And, more importantly what we now have is a “heap” and so data is no longer ordered as we might expect. This also forces any sequential access to refer to index allocation map pages. Overall, changing this is not something to be done lightly, and I do wonder at the thought process behind this change – or was it just a mistake?

It is trivial to add support for INCLUDE() and WHERE() clauses on SQL Server indexes in PeopleSoft – just change the model DDL for Index creation to have the two optional clauses defaulted to blank and then override on the specific index as needed: 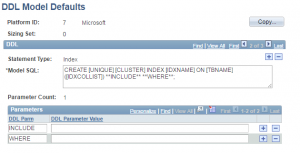 Obviously, at the individual index level you will need the full syntax including the keywords e.g.

Be aware that the criteria you can include is limited – refer to the Microsoft documentation for more details.

Jackson Structured Programming – now that brings back memories of my COBOL training at British Telecom in the late 1980’s.

What prompted this short post was a dreadful piece of hand-crafted PeopleCode to load a CSV file using a file layout. The usual “Operand of . is null” occurred unless the input file contained a “blank line” at the end.

The underlying reason for this was a failure to apply one of the fundamental techniques in JSP – the single read-ahead rule:

In fact, this approach is exactly what you get when you drag a file layout into a PeopleCode step in Application Engine – sample code that uses the JSP single read-ahead rule.

One of the slightly irritating parts of the build of a VirtualBox VM using the PUM downloads is the fact that the build script copies the DPK files into the VM prior to unpacking them. The data is stored under /opt/oracle/psft/dpk which is a mount point for “disk2”. Typically this disk expands to 23GB+ during the build process as a result of this approach.

To reduce the size of the VMs, what I like to do after the VM has been built is to:

I then close down the VM, detach the .vmdk files and clone the .vmdk disk files to .vdi files using virtual media manager. This has the effect of shrinking the resulting files – essentially doing a “VBoxManage modifyhd {vdi_file} –compact“.

In general, this approach releases approximately 27 Gb per VM – making the resulting VMs around 30-36 Gb. Still absurdly big of course 🙂

Me (to developer): Could you add a suitable composite (multi-column) index to table PS_xxxx please for columns C,B and A – there seems to be frequent access using these three columns that would be vastly improved by adding an index.

After a few days I notice new “alternate search key” indexes in the DEV environment. One for each of the columns A, B and C.

Me: Did you add that index?

Developer: Yes, but in the testing I did it wasn’t very much faster.

END_OF_DOCUMENT_TOKEN_TO_BE_REPLACED

What an obscene memory and CPU hog this can be. I’ve seen it grow to 3.2 Gb of RAM on one of my servers.

As it is used for Windows Updates, I stop the related Windows Services and mark them as manual to avoid this issue.

The services to stop/set to manual are:

Sure, I have to manually update but I want that on my servers.

When increasing the Java VM memory parameters for a PeopleSoft system under Weblogic (either in setEnv.cmd or manually by editing the cmdline registry entry if that’s your “thing”), be very careful not to increase the -XX:MaxPermSize memory allocation too much.

In fact I would leave it at 128MB or perhaps 256MB. Whatever you do, don’t update all three parameters in step, especially on a 32-bit Java, as you will hit Out of Memory errors on Weblogic startup way earlier than you expect. The MaxPermSize memory is allocated outside of the heap so the total memory you potentially need is more than you expect.

Seriously? Who thought it would be a good idea to create a view to return the DISTINCT list of BUSINESS_UNIT from RC_CASE? Talk about an O (n) performance disaster.

What’s wrong with a SELECT BUSINESS_UNIT FROM PS_BUS_UNIT_TBL_RC WHERE EXISTS (… case sub-query….).